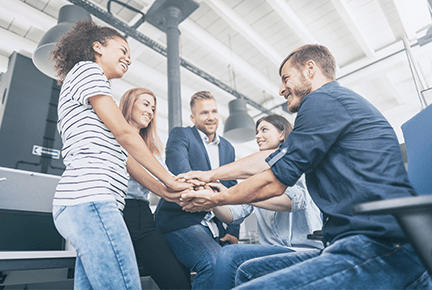 What is workplace culture? This is one of the most elusive concepts in business that I have ever encountered. I have been spending many years trying, not only to understand workplace culture, but trying to figure out how to explain culture to leaders. Because I am passionate about crafting intentional and thriving cultures at work.

I once did some consulting with a company that had a major culture problem. They didn’t know the cause, they didn’t know how to fix it, but they knew people were unhappy. They had a lot of attrition. They asked me to come in and help figure it out. So I started with an assessment. I observed meetings, I read company-wide communications, I looked at their HR programs. I remember one day seeing an HR email newsletter that went out to the whole organization. They were highlighting a “rockstar” employee in the form of an interview. And one of the questions they asked her was “What do you do in your free time?” And her answer was “In my free time, I like to dance.”

That question and answer struck me. Free time. In her free time, she danced. What I read there was that presumably, she danced when she wasn’t working. Because her work time wasn’t free. She was only free when she was not working. So what does that make work?  Prison? The opposite of free is occupied, confined, locked up.

Engagement is defined as the extent to which one’s attention or interest is occupied by something. Ah, occupied. The opposite of free. So when we’re measuring employee engagement we’re measuring the extent to which the company is locking up the employee’s attention. So goes the belief that the more attention the company has of the employee, the higher the engagement and so the more productive they are. Productivity is about output. So what we’re doing is reducing the employee to a tool towards output.

Quantum Workplace reports that companies with highly engaged employees are 17% more productive and 21% more profitable. It comes as no surprise that, when a workforce works longer hours or consumes more of their energy with their work, it will lead to increased output and revenue. However, employee engagement is limited in that it only measures the extent to which the employee fits within their role as a worker. It doesn’t actually measure the whole person’s experience. The person who has priorities and hobbies and a family and a life outside of work. Are the uber-engaged employees happy with their jobs, or are they just  feeling pressured to hit all of their deadlines?

What happens in a company where employees are viewed as a measure of output rather than a whole person? Their voices are silenced. Those who complain are viewed as bad apples. Employees who voice frustration with processes or procedures are told to get on board. Rather than listening to those who resist change as potential lighthouses who can educate us on upcoming red flags in our plan, they’re painted as “not being team players”.  They’re resistant to change which is never viewed as a good thing. The result is that employees must be quiet, get on board, be a team player, and don’t complain.  Complaining is terrifying in corporate America. You risk flaring office politics. You risk being viewed as a problem employee. You risk your job, your financial security, future promotions… it is much easier to remain compliant. And be quiet.

There’s a story about a woman named Esther who understood it was best to keep her mouth shut in the face of power. And she did for the most part, until it got so bad… until she had so much pressure that she couldn’t justify keeping it in anymore. She couldn’t keep silent anymore, and so she spoke up. And right before she did she said “if I perish, I perish.”  In a bad workplace culture, that’s how it is. Employees are compliant and quiet until it gets so bad that they burn out.  They decide they can’t take it anymore. They think, “if I get fired, I get fired.” And in they go to tell the boss what’s going on.  Now, in Esther’s case, it worked out. She was able to create change. But I can point to hundreds of examples where leaders have been less reasonable, less willing to listen. And employees got flagged for a future lay off, they got taken off the promotions list, or fired on the spot.  Too often, the Esthers of the world get the boot.

Reach for that goal and employee turnover will plummet. And you will have a loyal workforce, a fulfilled workforce that has employees driven to succeed over the long haul with you and towards your goals. Creating a culture that puts employee fulfillment as the measure of success instead of employee engagement will be one that supports your strategy beyond any other.  That’s how you create a thriving workplace culture… and that’s how you get results.